Last Saturday my ride launched at about 11:30 in 77˚ weather.  It had been cloudy and even threatening for part of the morning, but finally things broke up into bright sun and copious cumulus clouds.  The sun was as yellow as the button in the middle of the asters by the side of the trail, the clouds as white as the circular doilies of Queen Anne’s Lace in the meadows nearby, and the patches of sky in between those clouds as blue and intense as the first blossoms of the copious Cornflowers that were newly opened everywhere.  All felt fresh and new after the midweek downpours ensuing from a slowly moving frontal boundary.

It being Saturday and school being newly out, every Weekend Warrior and their whole family—Warrior spouse, kid on a bike, and toddler on a tricycle—was out on the trail, so one had to ride with one’s eyes open.  The line for the light at Maple Avenue was about ten people long.

Apparently the animals felt the same way about the coming of nice weather.  Outbound from Vienna, along Difficult Run, I spotted a terrapin on the trail ahead.  It was traversing at a testudinarian pace from right to left, and had almost reached the center line.   So I veered slightly to the right to pass.  Just as I got to the terrapin a rider coming the other way stopped smack in the middle of her lane, reached down, and picked the reptile up to help it complete its journey safely.  The angle of her lean, however, brought her head, shoulders, and arm onto my side, and I just avoided a glancing blow.  Weekend warrior behavior.

I went on all the way to the skateboard park at the west end of Herndon, but I promised not to further discuss this topic, so I will not report that it was my first ride to my former regular westbound turn-around point.  On the way back there is a long downhill stretch from Michael Faraday Ct. to Hunter Mill Road, featuring a speedy, leafy descent from Sunrise Valley to Buckthorn Lane, with a short, steep rise just before Buckthorn.  Along that stretch an animal ran right into the buzz-saw of my front wheel.  I suspect it was a squirrel, because they characteristically cross roadways in frantic, demented dashes, featuring instant 180˚ turns if they see a vehicle coming in mid-dash.  Could have been a chipmunk.  In any case, this one dashed straight into the spokes from about 20” away.  Why it didn’t see me coming I can’t imagine.  But the spokes were revolving so fast—I was probably traveling at about 22 mph—that it made a fur-muffled bump sound and bounced straight off again, grazing my right shoe, which was on the downstroke.  I barely saw it, because needless to say I was focusing on the road ahead.

Immediately I heard an approaching rider exclaim “oh dear.”  I didn’t brake or stop pedaling, because it would have been to no avail.  I have no veterinary skills, nor do I carry needles with units of tetanus vaccine, or leather gloves.  I am not equipped on any level to render assistance to wounded wild animals.  I assume it was the worse for the collision.  If it died, my major regret is that it did not live out its role in the food chain by providing a meal to some hungry predator, a hawk or a fox.

About a mile inbound from Hunter Mill, headed for Vienna, I saw another Weekend Warrior stopped in the lane ahead of me.  I reckoned it was somebody on their cell phone, or with a mechanical.  As I approached she was looking ahead, not at me, so I said “on the left” and swung around her.  Then I saw what she was looking at: a long Black Rat Snake, wriggling again from right to left, crossing the trail ahead of her.  Its head was in the grass on the far shoulder and its tail just past the center line, with a set of slithering S-curves worthy of the Shenandoah River.  Straightened out, it would have to have been at least 5 feet long.  Too late to stop, I swerved back to the right in front of her and just missed the snake.  I said “sorry, I didn’t see that!” as I passed.  She laughed and said “neither did I at first.”  So glad not to have injured a large reptilian eater of vermin and (less happily) bird eggs and baby birds. 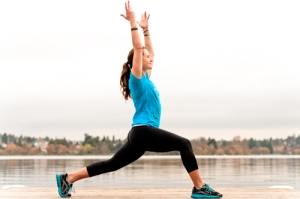 After all that action I didn’t know what to expect today, equally warm and sunny, though a bit more humid.  But I found: nothing.  The closest I came was the mundane, familiar domestic scene of an immature English Sparrow, now fully as large as its parent, standing in the middle of the trail, flapping its wings, chirping helplessly, demanding to be fed (before going back down to the basement to play more video games).  And then there was the exerciser, in tank top, spandex pants, walking shoes with low socks, and a pink baseball cap with an oversize brim about as big as the one Jayson Werth wishes he had yesterday.  She was blending yoga and walking by making each step a Runner Lunge.  As I passed I was SO tempted to say “Perfect for the Department of Silly Walks!  John Cleese has nothing on you.”  But I didn’t.

Still, you never know what you’re going to run into on the W&OD.

This brief posting is just to document that yesterday, on a cool, clear, breezy day, I got to my old westbound turn-around point, downtown Herndon.  For years I looped off the W&OD on the way west to climb Hunter Station Road, which has a steep incline of about 14% for about a quarter mile.  I gave that up as a normal routine several years ago when my heart rhythm wouldn’t take it.  Instead I extended the ride to west Herndon, but here is my original spot, exactly 11 miles from home, making a nice 22 mile ride.  You’re looking at the scene from the north side of the trail, where I am sitting on a bench.  Note the old station, the baggage wagon, the semaphore signal, and the plaza to the left with the table and umbrella, a new twist.  You can perhaps make out that the station door on the right has some stained glass panes, 1890s style.  So nice to be there again!  I promise that henceforth I shall continue to progress in my recovery without marking every small step with a blog posting. 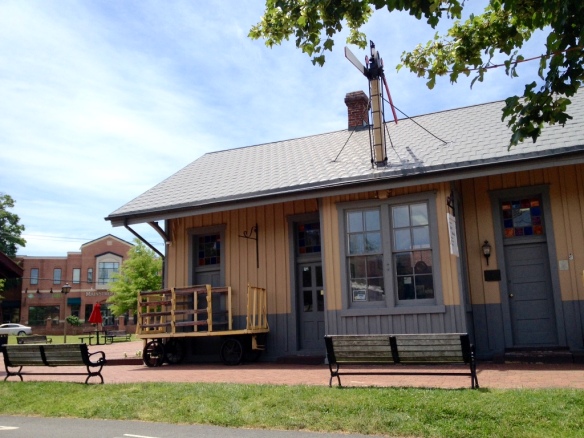 Herndon Station on the W&OD, my westbound turn-around point

© Arnold J. Bradford and Cycles of Life, 2010, 2011, 2012, 2013. Unauthorized use and/or duplication of this material without express and written permission from this blog’s author and/or owner is strictly prohibited. Excerpts and links may be used, provided that full and clear credit is given to Arnold J. Bradford and Cycles of Life with appropriate and specific direction to the original content.
Cycles of Life
Blog at WordPress.com.
Loading Comments...
%d bloggers like this: