In central Budapest, near the parliament Building and the Hungarian National Museum, there’s a large square, Szabadság Tér, in English “Liberty Square.”  It is lined with beautiful buildings dating back as much as 120 years.  The most notable of them were put up late in the 19th century, when the square was created by the clearance of barracks built for Austrian troops, who had implemented Austrian rule of Hungary.  The clearance of the barracks was the first gesture of liberty.

Some of the buildings were intended for public use, such as the Stock Exchange and the Hungarian National Bank.  Others, also in the Secession style of the times, became large mansions for the well-to-do.  Various monuments celebrating freedom decorate the open spaces.  There’s an eternal flame commemorating the executed leader of an 1849 uprising

against the Austrians, an obelisk commemorating the Red Army soldiers who died in the siege that took Budapest from the Nazis in 1945, a statue to American General Harry Hill Bandholtz, who protected the Museum from Romanian looting, and a life-size bronze of Ronald Reagan, the American president when the Soviet reign in Eastern Europe came to an end, in walking stride on the sidewalk at one end of the square.   All these effectively symbolize the long up-and-down struggle of the Hungarians to create and maintain a free nation and civic society founded in liberty.

The square today has open places for walking, sitting, relaxation.  There’s a bar-café in the middle, and others around the edge, and there’s a modern fountain consisting of a square marble space lined with three or four bands of waterspouts, shooting up two or three feet from street level.  The entire place exudes a spirit of liberty, of openness, of a free, confident society.

Except for one building.  It’s another graceful late 19th century residence, but it has been transformed into an ugly, armed bastion contrary to the values symbolized by the Square’s name and monuments.  It is the American Embassy.

We were in Budapest last week.  We strolled through Liberty park on the way to the Parliament, we had a light lunch there on the way back, we said “hi” to the bronze Ronnie, and we completely missed the embassy.  When we went back along the same route days 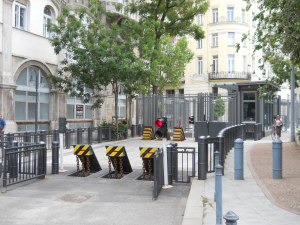 later, we realized that what we thought was some Hungarian security system gone mad, or some remnant of the Soviet occupation, like the many grim, gray cement buildings in certain parts of town, was is fact the Embassy of the “Sweet Land of Liberty.”

It is on the eastern side of Liberty Square, where the street is now blocked by the permanent security installations that encroach onto the sidewalk of the park itself.  Those installations extend half a block on either side of the embassy itself, and loom to block the view of the beautiful building in which the Embassy is housed unless you crane your neck to see the upper stories.  There are bollards, of course, at narrowly spaced intervals.  There are hydraulic blocks that jut up out of what was once the street to block motor vehicles, heavy, large, powerful, with black and yellow stripes plus big red reflectors.  Beginning around the corner on the side street and extending along an inner perimeter inside the bollards is a steel fence that looks like closely-spaced prison bars, about ten feet high and rock-solid.  It’s as if Piano and Rogers had applied their inside-out design style to the State Pen. 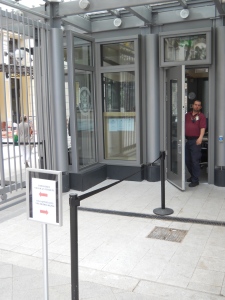 That’s a pretty good metaphor, in fact.  America has taken its skilled diplomatic staff, its warmth, its political and social power, its services to Americans abroad (like us!), its Liberty, and imprisoned all those good qualities inside this formidable, hostile barricade.  A sort of reverse Checkpoint Charlie, the symbolic message seeming to be “don’t even think about trying to get in, or we’ll shoot you down.”

Of course there are two very clean, efficient guard houses, complete with frosted-glass versions of the American Seal, where I am sure you go, state your business (appointment probably required), and receive permission to enter.

As we strolled by I snapped a photo of one of these with my point-and-shoot tourist camera, and was immediately warned by a Hungarian guard not to take pictures.  An American citizen not allowed to take pictures of his own embassy in a public place!  Guess the guard didn’t know that we had to sort that out with the local DC Police just a couple of months ago.  At home, Liberty won.  In Hungary, I was not going to debate the point.  We’d been to the Museum of Terror at 60 Andrássy Út., the headquarters of both the Nazi and the Russian secret police.  Though there is now Liberty in Hungary I had no desire to se the inside of any kind of jail cell involuntarily.

Better to let it go.  But that attitude is the whole problem.  I understand the practical needs for security, even if we do get too intense and paranoid in its implementation.  Yet such defenses, such paranoia, are not the “price of Liberty.”  Every single compromise of Liberty in the name of security, safety, caution, “common sense,” is just that, a cost, a loss, a concession to authority, power, control.  The American Embassy sends the wrong message, a message of fear, paranoia, hostility, confrontation, intimidation, adversarial attitudes.  There must be a better way.

We’ve had some windy days lately; if the air temperature is a month ahead of itself, the proverbial March Wind must be at least a month behind.  Wind always has symbolized the unseen, perhaps divine, perhaps immanent, power of the universe.  It seemed the essence of nature to the romantics, who saw the wind as the “trumpet of a Prophecy” (Shelley), a force that animates flowers to “[toss] their heads in sprightly dance” (Wordsworth), an awe-inspiring monarch who demands that his subjects, the trees, “bow down their heads” with “trembling” (C. Rossetti).

As I ride home this time of year with a tailwind, I feel like the wind itself, because I see the power and trembling all around me as I approach.  Along the trail green leaves newly dislodged, as well as some brown brittle leftovers from last winter, scuttle along just as Clement Moore described : “as dry leaves that before the wild hurricane fly.”  They’re fleeing from me, running on ahead.  I am that hurricane!

Along the edge of the trail grasses wave, as well as the broader spikes of day lily leaves, the fat ovals of milkweed, and many others.  Most have paler undersides, which the wind exposes.  They nod in the direction I am going, as if pointing the way.

Beyond them shrubs and trees do the same.  The distinctive silvery leaves of Russian olive trees shimmer; maples and oaks lunge; tulip poplars find some of their blossoms dislodged.  Everything is a rush of motion and of sound as well.  It’s hard to hear the small noises of chain and pedal when there’s such commotion.

And the finest, most delicate gift of all comes in the scent of wild roses, which are out in their full glory right along with the wild blackberries (see the posting “Don’t Stop, but Smell the Roses,” 5/7/2010).  The strong gusts carry the roses’ perfume all over, broadcasting it far more widely and intensely than it carries in still air.  The whole length of the trail is infused with that fine, ultimate odor of spring.

© Arnold J. Bradford and Cycles of Life, 2010, 2011, 2012, 2013. Unauthorized use and/or duplication of this material without express and written permission from this blog’s author and/or owner is strictly prohibited. Excerpts and links may be used, provided that full and clear credit is given to Arnold J. Bradford and Cycles of Life with appropriate and specific direction to the original content.
Cycles of Life
Create a free website or blog at WordPress.com.
Loading Comments...
%d bloggers like this: