Last Saturday Jane and I took the Metro to the National Gallery of Art to attend a lecture by our friend and my colleague Eric Denker.  The Metro was fairly crowded, because it was the occasion of the March for Science and Earth Day.  That’s why we did not drive; too many street closures were in the offing, and even if we got in we would not be likely to get out easily.  We struck up a couple of conversations with grizzled marchers (one couple from Newton, MA), carrying their placard slogans, and wished them well as they debarked at Federal Triangle, launching into the drizzle for their walk to the Washington Monument.

Our own walk in the insistent wet was to the East Building Auditorium, where Eric spoke on the subject of Frédéric Bazille, a young, aspiring French painter, friend of the more famous Impressionists.  His more concrete style stood in contrast to the broken brushstrokes of Monet, and was somewhat more in the Manet camp.  He decided, with the thorough disapproval of all his family and friends, to enlist to fight in the Franco-Prussian war as a Zouave.  The bright, flashy uniform on his 6’2” frame must have made a good target, because he was killed on his first day of combat, less than 50 miles from Paris, just a few days before his 29th birthday.

Afterwards we completed our tour of the Bazille exhibit that we’d begun before the lecture, and stopped by to see a magnificent exhibit of Della Robbia ceramics from the Italian Renaissance.  We’d never appreciated the differing styles of the different family members, or the secret and exclusive success of the glazing formulas.  Our favorites included Luca’s “Holy Visitation,” Andrea’s “Virgin and Child,” Girolamo’s “François I,” and Giovanni’s “Resurrection of Christ.”  We traversed the length of the West Building indoors to stay out of the rain longer.  And then, before the wet walk back to the Smithsonian station, we stopped to visit The Chalice.

The National Gallery of Art is not noted for its pre-Renaissance holdings.  For medieval and ancient art in our neck of the woods one really needs to head up I-95 to Charm City and the Walters Art Gallery.  But our beloved National Gallery of Art has one piece that will stand up to just about any single piece in any European cathedral treasury . . . well, except for Aachen.  Ever since I discovered The Chalice in the 1970s, I have been drawn to it like a moth to flame, and more often than not we stop by the small, dark room of which it is the spotlighted centerpiece when we visit the museum. 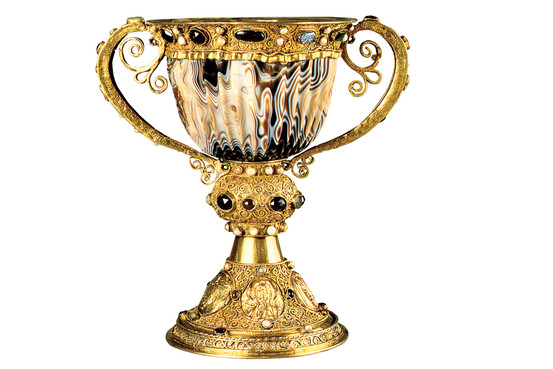 The Chalice is a 12th-century work consisting of a sardonyx cup dating back to the 2nd or 1st centuries BCE, carved from a single piece of spectacularly marbled stone, in a heavily gilded silver setting with rubies, sapphires, pearls, glass, and white glass pearls.  The goldwork is heavily filigreed.  On the base are four discs; the one original shows the Byzantine Christus Pantokrator and the Western Alpha and Omega.  The other discs probably portrayed St. Denis and his two companions.  It was made for Suger, Abbot of St.-Denis, near Paris.   Suger, a powerful French churchman and statesman, caused his abbey church to be rebuilt in a new, light and lofty style.  It’s the earliest Gothic church there is.  Suger believed in the mystic spiritual power and symbolism of light.  The choir of his rebuilt church is illuminated by tall pointed stained glass windows all around.  In 1144 this renewed building was dedicated with many notables in attendance, including King Louis VII and his queen, Eleanor of Aquitaine.  (As one historian said, “much of [Louis VII’s] trouble” arose from this marriage to the headstrong Eleanor).  This chalice was presumably used in the dedication ceremony.

It’s not just the building in which The Chalice resided that’s remarkable.  St. Denis himself is a worthy personage.  He was the Bishop of Paris in the 3rd century, a time when the Christian Church was subject to persecution.  So effective were he and two colleagues that the Romans who then occupied the region perceived him as a threat to pagan practices.  Denis (whose name is a Frenchified version of the original “Dionysius”) was executed by decapitation shortly after 250 CE on Montmartre.  He then attained fame as “one of many cephalophores in hagiology” (thanks, Wikipedia) by picking up his head and walking 6 miles (10 km) to the place that now bears his name, preaching repentance all the way.  (An alternative narrative has his headless corpse being thrown into the Seine, and then recovered and buried by his followers the same night.  But where’s the fun in that?)  A small shrine was built there in the 5th century, and from the 10th century onward all French kings were buried in the church, until their remains were all desecrated by the French Revolution.  Today the community is a working-class suburb of Paris, with a stop on the Metro and the French national football stadium, the Stade de France, as well as the church in all its 900-year-old splendor.

With all this rich Christian and French tradition surrounding The Chalice, who wouldn’t stop and soak it all in whenever possible?  We went home in the rain happy.