In sports, weather plays differing roles. I have never seen cricket, for instance, played in anything other than full sun. Baseball games used to be called in wet conditions, either “rained out” if 5 innings had not transpired, or shortened when the clouds burst open in the seventh inning, let’s say. These days, thanks to the true driving factors of commercial TV and travel schedules, no thought given to fan interest, ball games are sometimes suspended for hours while the storms pass, and completed before tiny crowds in the wee hours of the morning. At other times, they are delayed as long as possible (possible for the schedule, not the fan), and—as in one recent Washington-Baltimore game—called off just as the rain is ending. Go figure.

In the Tour de France, however, the weather is simply the weather, and the race goes on regardless. As Jesus once said, God “sends rain on the just and on the unjust.” Since every cyclist is getting rained on, the race conditions are still equitable. And man, did the Tour riders ever experience equitability this year! Starting the race in England for the first three stages assured that the likelihood of liquid sunshine was high, and that potential was fully realized. Ironically, the main casualty in those English stages was the Manx Missile, Mark Cavendish. On the sprint finish to the very first stage, in damp conditions, trying to get a line, he displayed his best Robbie McEwen imitation by lunging to the left and putting his head and shoulder into Simon Gerrans. The videos of the crash show the high-speed violence of professional cycling and the abrupt swing of fate in such circumstances. Two riders are down in an instant, and their momentum carries them for many yards along the finishing straight, scraping along the tarmac as the crowd screams. Cavendish assumes a fetal position, rightly fearing for his safety if somebody in the following pack hits him. Nobody does, but while the prostrate Gerrans looks over at him as if to ask “are you OK?”, then gingerly arises and starts seeing if his bike is still functional, Cavendish just lies there in pain. They get him over to the side wall, where he sits in anguish, and very soon the ambulance arrives to take him to hospital. His shoulder is separated; his Tour is over.

The rain followed the Tour to France, and really played hob in Stage 5, which the Tour planners had made interesting by including large sections of cobblestone farm roads, usually reserved for the specialized realm of one-day “Classics” races in the Spring rather than the 23-day stage race that is the Tour.  Cobbles are hard to ride on when they’re dry, as classics riders will tell you. But they are doubly difficult when rain has made them slippery and has transformed the roadside dirt and dust into mud. Riders cross the finish line caked from head to toe, with only their eyes, protected by just-removed goggles, uncoated. And this year on Stage 5, “rain was general all over Flanders and Northern France,” as the cyclingnews reporter described it, channeling his inner Joyce.

Road riders often have problems dealing with cobbles in the best of circumstances. In 2004, the Tour’s Stage 3 covered some cobbled sections, and Iban Mayo lost several minutes to Lance Armstrong, who continued on for his 6th of 7 Tour victories. Armstrong himself lost time to Alberto Contador on cobbles in the second and last year of his “comeback,” 2010. But those stages were run in dry conditions. In this year’s cobblestone encounter, Vicenzo Nibali, heretofore best known as an excellent climber, picked up major time over all the other contenders for overall victory by surviving the cobbles with a third-place finish only 19 seconds off the winner’s pace, while other contenders were dropping huge chunks of time. Nibali found himself more than two minutes ahead of the likes of Alejandro Valverde, Andrew Talansky, and Tejay van Garderen, and over two and a half minutes up on Alberto Contador. And as for the defending Tour winner of 2013, Chris Froome pulled a DNF after crashing twice, once near the start and then again in the midst of the cobbles, severely injuring his wrist and hips. His jersey and shorts were ripped to shreds, and the areas of skin beneath looked like raw meat. 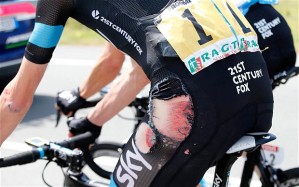 Chris Froome after his Stage 4 crash; he abandoned after another the next day.

And the ranks of the contenders have further thinned over the last several days. Andrew Talansky crashed on a wet descent on stage 8 and lost two minutes. Other crashes reduced his strength and he lost 10 minutes on the rainy Stage 10. Finally on a dry sunny Stage 11 he just could not cope and sought to abandon, but after team Directeur Sportif (“coach”) Robbie Hunter urged him on he heroically finished the stage alone, 32 minutes behind the day’s winner and a full 12 minutes behind the next-to-last rider. He did not start Stage 12.  Alberto Contador went down on a wet mountain descent during Stage 10, breaking his bike with the impact of the fall, tried to continue on, but could not. He had fractured his tibia.

So this, it could be said, is a Tour that was virtually over after five Stages because of the weather. One could argue that it wasn’t really the weather’s fault. Why didn’t the riders use, for example, “grippier” tires, or even tires with treads, when it was raining? They do make such things. But professional riders can handle bikes equipped with treadless racing tires (“slicks”) in wet weather, and usually do. Maybe they should slow down when it’s wet? Even I can tell you that goes against the grain of most riders. Especially in racing conditions, nobody is going to willingly give up the chance to gain a little time, or concede even a little time to others. The basic fact, however, is that some cyclists are better bike handlers than others. The combination of wet roads and slick tires is going to throw a bright and cruel spotlight on those who can’t control their bikes, and woe be unto those other riders around them who are victims of their inabilities.

Weather exists independently of human plans. The wind blows where it wants to; the rain falls on us all. And when that happens in bike races, the result is not “unfair” or “distorted.” Rather a new, unexpected range of criteria has been introduced. We discover which climbers also ride well on wet cobbles. We discover who can really handle a bike on a slick descent. We learn who has a team who can keep him out of harm’s way in dodgy circumstances. This year that man is Vincenzo Nibali. And unless he has a horrendous day in the high mountains, or somebody else has a great one, He is going to be wearing the yellow jersey on the podium in Paris on July 27.