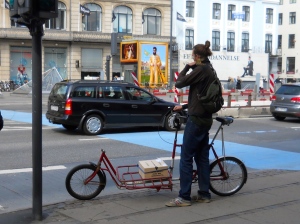 On the morning we left Copenhagen on our May trip to Europe, we spotted a strange contraption as we walked to the Metro for the trip to the airport.  It had begun life as a regular bike, apparently, but had been modified into a lightweight freight hauler.  Replacing the front fork was a vertical post extending downward to a tubular frame extension that ran forward from the bottom bracket a good three feet before angling upward to join with a truncated stem and fork that held a multi-spoked, smallish wheel with a fat tire.  An offset tube running from the stem to the bottom of the vertical post appeared to be the steering mechanism.  The space between this front wheel assembly and the bottom bracket held a tubular carrier, inside which was a box bungee-corded to that vertical post.  The arrangement would have allowed for a very tall box, though this one was about the size of a wine carton.  The rear end of the vehicle was fairly normal for a bike, though the seat post was exceptionally long.  There appeared to be no brakes, but there was a rear derailleur cable for some cogs, though just a single crank gear. 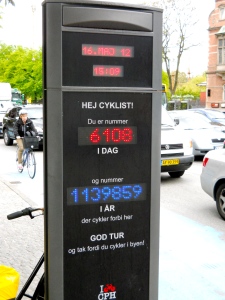 This amazing modification of what had begun life as an ordinary bike typifies the pragmatic urban use of bicycles in many European cities, but especially Copenhagen.  While it’s no Amsterdam, the Danish capital is full of bikes, which form a central component of commuting, tourist recreation, and even, as in the example above, business transport.  Right near the Town Hall is one of several major bike roadways in the city.  Essentially these are wide sidewalks, clearly demarked into pedestrian and bicycling sides.  Woe be unto the oblivious American tourist, unused to such cycling-friendly arrangements, who strays onto the cycling side.  While the Danes are very polite, and usually quiet and courteous in avoiding the errant strangers, there are just so many of them coursing along at all hours on their bikes that they are likely to overwhelm the outlying walker.  On the Town Hall bikeway there is an electric sign counting the number of riders passing that point on the given day, and over the previous year.  At 3:09 p.m. on May 15, 2012, six thousand, one hundred and eight riders had passed that point on that bikeway that day.  Yes, that’s right.  Not over the last week, and not over all of Copenhagen.  That point, that day.  Over the last year, 1,139, 859 had passed the counter.  You can see number 1,139,860 approaching on the left edge of the photo.

Those numbers are staggering.  Think of the difference this mode of transport makes in 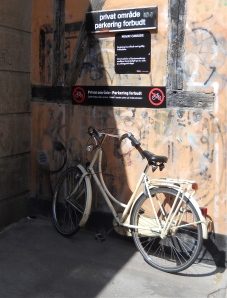 Hanging loose: even I can make out the Danish prohibition against parking here.

traffic congestion, air pollution, and general public health.  All those bike commuters, though they don’t move at the speed of the professional peloton, are getting a good cardio workout every day on the way to and from work.  There is no sulfur dioxide from carbon fuel being pumped into the air from their vehicles, their VWs and Saabs are not on the road blocking others, their wallets and purses still contain the Kroner they are not paying for gasoline at the rate of $7 or $8 a gallon [I can’t stand American whining about the cost of gasoline when most of the rest of the [less affluent] world is paying so much more].

Tourist “bycyklen” in Copenhagen are simple, fixed-gear vehicles with (apparently) coaster brakes, mudguards (a really useful feature in this showery place), and fat seats, not to mention aero-discs on their wheels.  What is this, some kind of low-speed time trial?  The discs look cool, but I’d imagine they could be an impediment in a crosswind, and the maritime breezes do blow around there.  I do like the clipboards that give the rider a map of the city with the prime tourist locations indicated.  They look like an easy and enjoyable way to get around to the several palaces and castles and their extensive grounds. 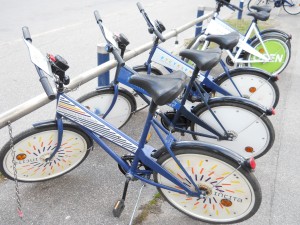 A row of cute rental bikes for touring Copenhagen.

Though many bikes are equipped with small, unobtrusive, built-in locks, my impression is that many Danes don’t lock their bikes.  There seems to be a level of trust and honor there not found in every community.  Bikes are all over, and parking stands are generally provided.  That’s another issue when comparing the ease of bike riding there to that in my own American town, where bike parking is rarely facilitated.  One small issue I have with urban bike users in Copenhagen and elsewhere is the decidedly optional usage of helmets.  Individuals seem to have the idea that low-speed, urban cycling, as opposed to higher speed riding on more open roads, makes them immune to head injuries if they fall.  Many a seriously injured urban rider could tell them otherwise.  Generally, though, in Copenhagen bikes rule!

2 thoughts on “Cycling in Copenhagen”