Brakes wear out eventually, and since my Trek hit the 6500 mile mark a couple of weeks back I was not too surprised to hear the rasp of metal on metal when I hit my left brake lever a couple of weeks ago.  Worn brakes are no joke; it doesn’t take long for the rims to get badly grooved by metal contact.  I like my wheels and am not looking for an excuse to upgrade, so my next logical step was to get replacement brake pads immediately. 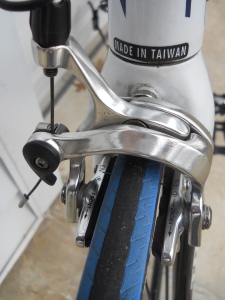 Caliper brake on the Trek 2.1. Note the lettering on the shoes.

Replacing brake pads is about the easiest repair there is on a bike.  In theory.  And only slightly more difficult in practice.  Essentially it all boils down to removing the old pads, replacing them with the new ones, and aligning them relative to the wheel rim.  I’ve been doing it for years.  But I’ve never done it with the Shimano Tiagra brakes on this machine.  When I replaced the pads on the Bianca Squadra’s Compe II brakes, all the stores had for such old equipment were inferior generic replacement assemblies that included a new brake shoe; I could not get the pads alone to slip into the original slick black-painted shoes.

There are three different types of bicycle brakes, excluding the new-style disc brakes.  Racing and road bikes typically use caliper brakes, in which the unit is controlled by a wire on the right side of the assembly.  V-brakes are now pretty standard on mountain and hybrid bikes; the configuration allows for larger tires.  The same is true of cantilever brakes, whose old style configuration is harder to adjust.  The latter two brake styles almost universally have replacement parts that are a shoe/pad/bolt combination.  of these, the caliper brake is easiest to work with.  I just have to flip the quick-release lever to move the brake pads away from the rim for inspection or maintenance.  In theory at lest the pads can even be removed from the shoes without removing the shoes from the caliper assembly, because they are held in place with a retaining bolt.  Once the bolt is loosened the pads can be slid out of the shoes.

I bought two sets of Kool-Stop pads, on the theory that if the front brakes were shot the back 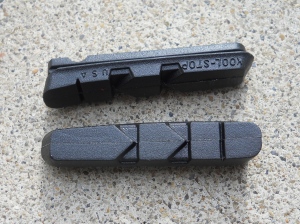 ones wouldn’t be far behind.  But my immediate task was to get the old shoes off the front.  I was surprised how pitted they were.  Ron, the Spokes Etc. mechanic, said that brake pads typically pick up stones, dirt, and other forms of grit that get temporarily attached to the wheel rim.  And that’s what happened with my right front pad.  It had a small but hard chunk of metal embedded in it!  This occasional flotsam, even if not embedded, pits the pads, making them more worn and less efficient.  The new pads’ only indentations are intentional, for compression and water/debris removal purposes.  They even have a little bit of “tail-in” over the last ¼” or so, which Ron says allows the pad to squeegie off a damp rim before it makes hard contact.  Apparently that wars off pretty fast, too.

No problems with the installation, and I’m now riding with silent, effective braking.  If only it were this easy with the Audi!